This is Part 2 of a 4-Part Guide I’ve published on Guild Wars 2 PvP & Solo Queue.

After you’ve read my post on PvP Tiers, Team Comps & your Win Condition and you have an idea of what role you want to play, let’s go over the main competitive maps and how to rotate on each one.

Take a look at the Forest of Niflhel map: 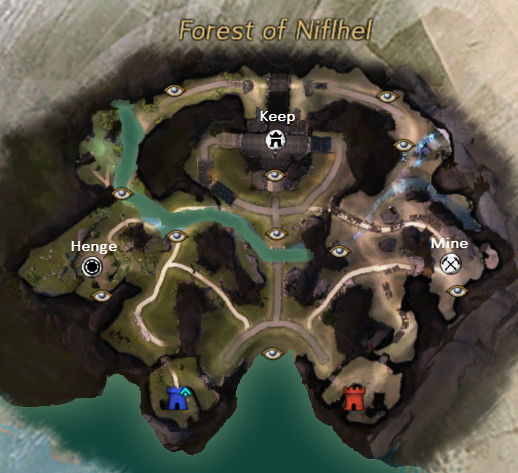 Forest of Niflhel is a small sized map with a 25 point secondary objective boss on each side (Chieftain Blue and Svanir Red).

Forest is the best map for DPS-oriented team compositions.

The reason for this is because the map is so small, after you get a kill you can continue to get more kills and other cap points quickly before your enemies can respawn to help, creating a snowball effect. However, it does not favor dueling on the Far node as much since the enemy respawn is so close

Kills on home-point and Middle node are heavily rewarded, while far-point is more of a distraction than a priority.

Let’s say at the start of the game you are on Blue team and your Forest split is 1-3-1. 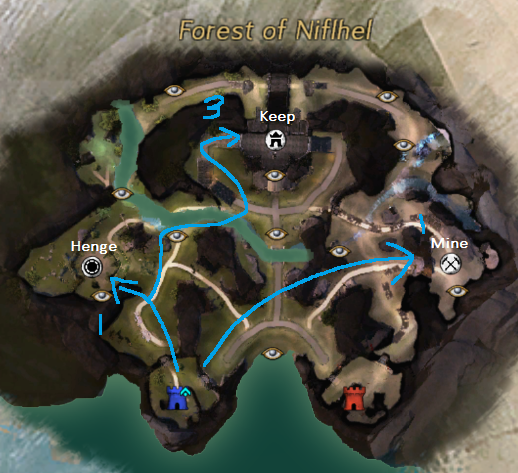 The first thing to notice is that the player that is going to far-point (Mine) has the most dangerous and almost equally long path to Far as mid-point (Keep).

Typically, the player going to Mine is going to take a lot of aggro and may not be able to make it there safely. Therefore, the job of the player who went to Mine should be to distract if he takes a 2v1 or more so that Keep and home-point (Henge) can win.

Alternatively, if the person at far-point wins the fight the best options in each scenario should be:

As you can see when playing solo queue even if there isn’t communication, the map can tell you a lot of information to play off of.

So looking at the map consistently is INCREDIBLY important!

Now what if you’re one of the 3 going to Keep?

Then your job is probably to be in a team fight, properly position, and play it out until you win. That will come with mechanical practice and positioning that you will be able to improve on the more you play.

The scenarios at Keep that you will most likely be in are:

If your strength lies in team fighting, then you go where the team fight is. This is normally Mid, but not always. Continue to do that for the rest of the game, and keep attempting to put yourself in favorable matchups. 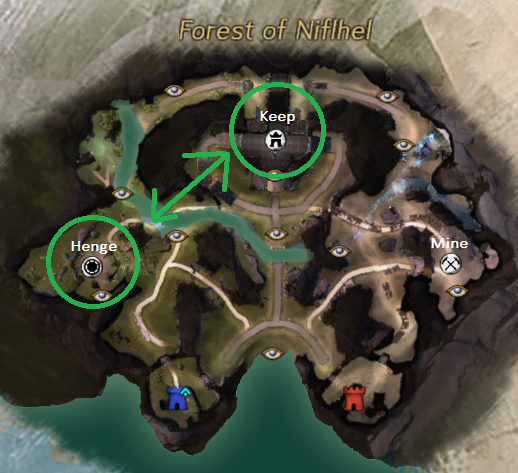 The person that holds Henge or Home in solo queue usually has either the easiest job or the hardest job. However, on a map like Forest, even if you die at home-point it isn’t as important as losing Keep because of how small the map is.

If we look back at the map above, the point from spawn into Henge is the closest on the map by a long shot.

So in theory, the person that is sent Home on Forest could be a really tanky class or just a good duelist if that’s the role you want to take.

The most important part of home-point is if 5 people are shown on the map you SHOULD NEVER sit on the point doing nothing. This happens all the time, and it’s infuriating and makes the game a legit 5v4.

Don’t do this on any node at any time. Look at the map!

Forest in a Nutshell:

Focus on kills and not points in order to snowball Mid and Home. Any Far node assaulter is just a distraction for Mid and Home to win. Home-point can be stalled out, have a duelist on it, or a sustained 2v2, etc.

If at any point in time you die, and this goes for any map, the first thing you should do is look at the map and go where you are needed.

Do NOT go into already losing fights.

Look at your teammate’s HP bars and the map for enemy down-states.