This is Part 3 of a 4-Part Guide I’ve published on Guild Wars 2 PvP & Solo Queue.

Part 3: Legacy of the Foefire PvP Strategy and Rotations

Legacy of the Foefire is a fairly large map, but the points between spawns to each of the nodes are pretty much equal distance.
It should also be noted that Graveyard is the node with the largest circumference on all competitive maps. 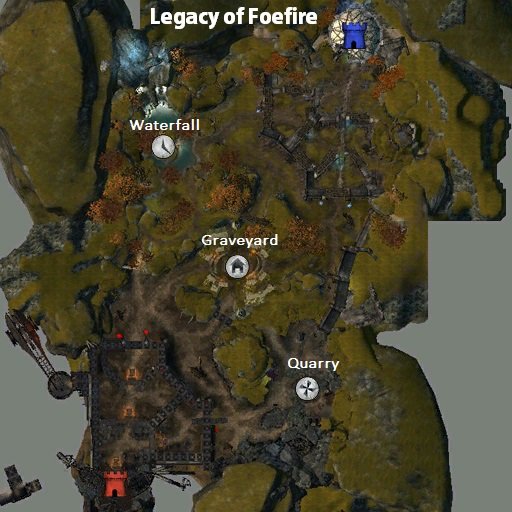 Team Guild Lords exist on each side of the map that gives 150 points after breaking down the base door and defeating them.

This makes Legacy a balanced map that does not favor any single composition or play-style too heavily. However, since Graveyard is so big, oftentimes the first team to cap it will have a huge advantage due to how hard it is to get back.

I’ll illustrate a different opening split and explain the nuances of Legacy that are different from Forest of Niflhel, as well as add some class samples. 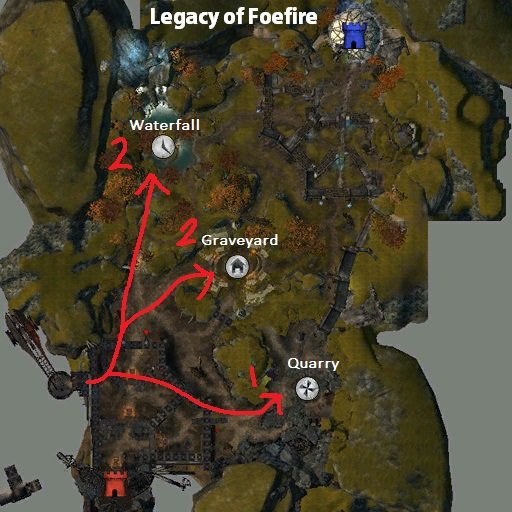 The first thing to note that since this is a map where both teams are spawning from a base gate that has to be destroyed, it is much safer to send people to Waterfall and Quarry either alone or as a pair.

The reason for this is if Quarry is your Home node and that person gets outnumbered he can run away into his base and go to Graveyard. The players going to the Waterfall can also take favorable fights or go to Graveyard if they do not want to outnumber someone.

This gives you more options to win depending on how you want to play.

So let’s say this is your team composition:

And you split the following way: 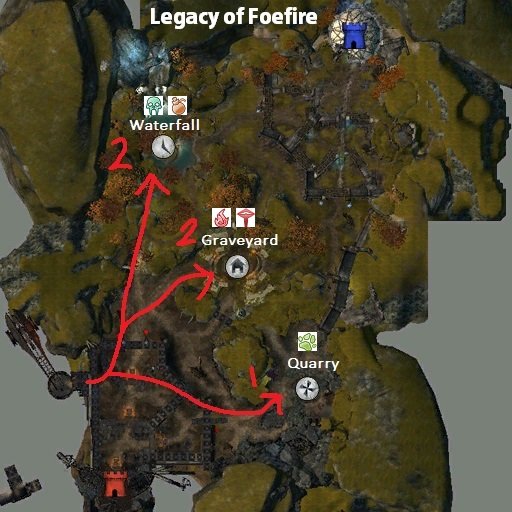 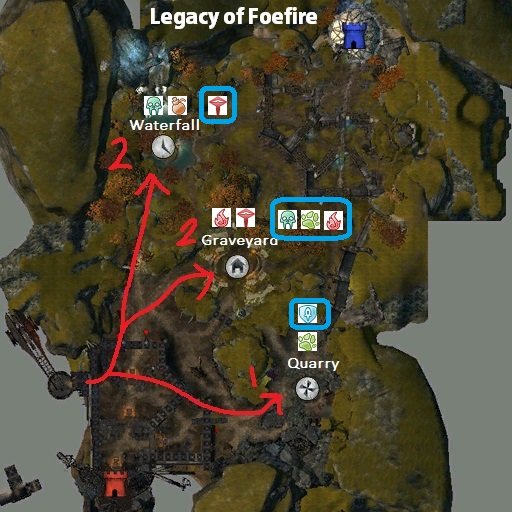 Blue Team has an advantage on Graveyard while having a disadvantage on Waterfall, temporarily. This type of split however, creates a position in which someone from Red Team Waterfall has to go help mid-point or risk losing it.

You do not want to lose Mid on Legacy.

Another thing to note is Blue Team’s Dragonhunter has managed to avoid both the Engineer and Elementalist by going to Quarry to fight Red Team’s Druid.

This creates a situation where the matchup for Quarry is fairly equal giving either team a chance to win the node.

Blue Team’s Revenant has the toughest job since he has to live the 1v2, but on a map like Legacy he could easily run back into his base if he needed to survive.

Once 1 person from Red Team leaves Waterfall he can then push back in to have a 1v1. Let’s discuss each person’s job on each team and how it will affect the map.

In-Depth Analysis of the Classes in This Scenario:

– A Necromancer is far too strong to not be in a team fight. He should leave the Engineer to fight 1v1 at far and go Mid to try to help his team win the 3v3. A Necro should only hold the node if there’s something his team can’t 1v1 or if that’s your most fitting play-style.

– Revenant is the most durable DPS class with the ability to dodge like an Sword/Dagger Thief with the added bonus of having more blocks. Revenant’s goal should be dodging the Necro’s marks since that’s the main thing that will kill you in addition to blocking scepter attacks. Playing defensive when outnumbered is key until you receive the help of someone from Waterfall. Revenants should only hold nodes if they are good duelists.

– The Engineer can choose to fight 1v1 or go to Mid, but since you get destroyed by Necros it will be wise to take the fight at Waterfall and let the Necro go to Graveyard. Depending on your play-style after you win a node you can choose to hold it or roam.

– Just win your 1v1 vs. the Dragonhunter so you can have bragging rights. You’re probably the most suited to hold a node on this team after you win one.

– Heal your teammates, provide the amazing support that Elementalist’s can give out and focus on winning the 3v3 at Mid. After that you can choose to roam to heal other people or hold nodes if you win them. Elementalist’s can’t 1v1 anything on support builds and should never do so unless you can kill it 100% or if you own the node.

– You have the man advantage Mid. Your job should be to destroy whatever is there as quick as possible. If you get into a mirror matchup vs. another Necromancer don’t blow your plague signet too soon. That’s how you die. Your team has decent damage even without you in a team fight, so holding a node 1v1 isn’t bad, but it’s probably preferably you get the first kill and try to snowball other nodes.

– You’re being 1v2’d right off the start, lucky for you there’s a gate that you can run through to save your life if things go bad. DO NOT DIE at all costs because you can always push back into Waterfall and duel the person there or choose to go to Mid right off the start and outnumber 4v2. If you choose this option you’ll most likely be outnumbering 4v3 since someone from Waterfall will come. If you can wipe their team to get the point this will be extremely worth it, otherwise, just 1v1 whoever is on Waterfall to try to win it if you’re a good duelist.

– If you run the trait that roots on CC then you can help the Necro and Elementalist kill the 2 people Mid extremely quickly. Be aggressive and be ready to daze when the body goes down. If things to bad you’re the primary rez-bot in this fight, so don’t forget to look at your teammates HP bars. If you run Search and Rescue it could change the fight, just be ready to use it as soon as a teammate drops.

– You’re outnumbering Mid. Play aggressive and try to interrupt your enemies with your CC and shocking aura. Air Overload is your friend in aggressive scenarios. If it becomes a big even team fight look to keep your teammates alive by giving them support. You’ll likely want to roam into a team fight every chance you get. Elementalist’s can’t 1v1 anything on support builds and should never do so unless you can kill it 100% OR if you own the node.

– Dazes wreck Druids. This should be a straight 1v1 without any interference, if there is then you should be able to get out and live by running on the ledge that is un-portable on Quarry. Rune of the Trapper is overpowered on Guardian and can help you turn and burn enemies or run away with Superspeed + stealth. Look to never hold nodes as this class as it’s primarily a DPS Roamer unless you know a certain few matchups VERY well and can win them.

Legacy of the Foefire Conclusion:

It’s a balanced map that rewards wins on every node fairly evenly. Graveyard is obviously the most important node, but you can also win on side nodes on a map like Legacy in solo queue – especially if Mid is held neutralized.

Pushing into Far or Home are both acceptable for snowball circumstances if Mid is too difficult to win. Watch for the 350-point lord rushes. This map has a lot to do with which team gets to 350 points first for Lord pressure. Take advantage of your base gates to survive from home-point pressure.